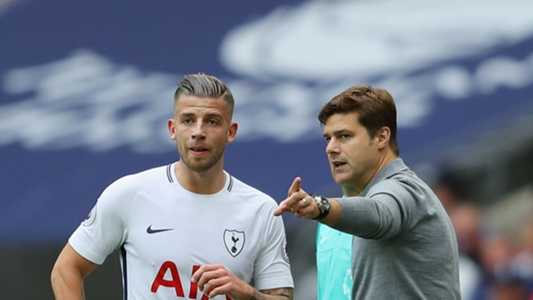 Toby Alderweireld is sure Tottenham will appoint a "big" manager after the Premier League club elected to relieve Mauricio Pochettino of his post.

Tottenham are just a win away from the top six, but are 11 points adrift of the Champions League places with 12 matches played.

Jose Mourinho has emerged as a front-runner to take over and Spurs defender Alderweireld – whose relationship with Pochettino was reportedly strained – is confident Tottenham will have a new manager in place quickly, and one with the credentials to take charge of a club aiming to compete on both the domestic and European fronts.

"Spurs are a big club, there will be a big manager for us. Hopefully we know quickly," Alderweireld told Sky Sports on Tuesday, after playing in Belgium's 6-1 Euro 2020 qualifying win over Cyprus.

"It is a difficult situation, I don't know really the right thing to say. It needs a couple of days to sink in.

"I'm 30, and it'll be the first time in my career there's been a change of manager [at my team] so it'll be strange for me. I can't say how it feels. We have to work hard and I think there will be a new manager quickly.

"We have to stay together, change things as quickly as possible together. The strength of our team is the work rate – that won't be changing."

#COYS. Thank you from our heart to our players , staff, and special thanks to you all , lovely Spurs Fans . pic.twitter.com/qfZjyUaWGu

While Alderweireld has been linked with a move away from Spurs in recent seasons, he is proud of what the team achieved under Pochettino.

"I am surprised," Alderweireld said.

"We came a long way together, with a lot of players, achieved big things, you can see from where we've come from before my time at Spurs, we achieved a lot of things together and I think he took the club to the next level."