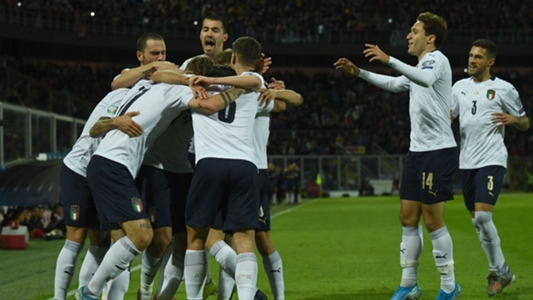 For the first time in their history Italy had seven different scorers in one game, with the victory also meaning they won all of their games in a World Cup or European Championship qualifying campaign for the first time.

Ciro Immobile and Nicolo Zaniolo were the only players to hit the back of the net more than once, with Nicolo Barella, Alessio Romagnoli, Jorginho, Federico Chiesa and debutant Riccardo Orsolini also on target for the Azzurri.

Zaniolo’s first two goals for his country made him the youngest Roma player to score for the national side at the age of 20 years and 139 days.

Speaking to Rai Sport about his achievement, the midfielder said: “I am very happy, I’ve made another dream come true tonight, but I realise it must be just the beginning."

It the fourth time Italy have scored nine goals in one match, though Edgar Babayan’s late consolation for Armenia denied Italy a 9-0 win and therefore the chance to equal their biggest-ever margin of victory, achieved against France in a friendly in 1920 and against the United States during the 1948 Olympic Games in London.

The only other time they have scored nine goals or more was an 11-3 win against Egypt during the 1928 Olympics in Amsterdam.

Only four teams have scored more than nine goals in a European qualifying match, with the record being Germany’s 13-0 hammering of minnows San Marino in a Euro 2008 qualifier in September 2006.

The convincing victory was a fitting way to wrap up a dominant qualification campaign from the four-time World champions and the perfect response to the disappointment of failing to reach the 2018 World Cup, the first time Italy had failed to qualify for the tournament since 1958.

The former Manchester City boss has won 14 of his 20 games in charge since his appointment 18 months ago, with that revival in form suggesting they could be among the contenders for next summer’s tournament.