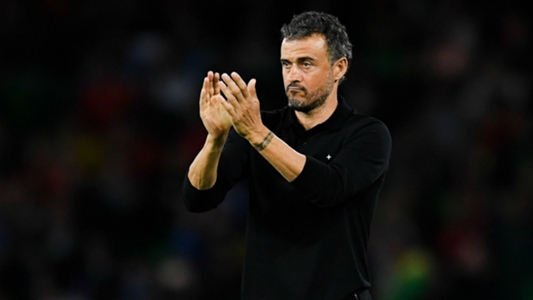 Luis Enrique is set to be reinstated into his role as Spain national team manager, reports claim, with current coach Roberto Moreno refusing to talk to the press after La Roja finished up their qualifying campaign for Euro 2020.

Spain swatted aside Romania 5-0 at the Wanda Metropolitano on Monday to confirm their participation in next year's tournament, but eyebrows were raised when Moreno cancelled his post-match press conference following the match.

Several reports in Spain claim Moreno's hours as national team coach appear to be numbered, with the Royal Spanish Football Federation (RFEF) having called for a snap press conference on Tuesday.

It is speculated that Enrique is ready to return to the hot seat for Euro 2020 after officially stepping down in June due to personal issues.

Enrique didn't initially reveal his reasons for vacating the job, but it became apparent in August when his nine-year-old daughter Xana tragically died of bone cancer.

Moreno, who was Enrique's no.2, has guided Spain to a nine-match unbeaten run since his first match in a charge - a 2-0 win against Malta in March.

Despite struggling in October in away draws against Norway and Sweden, La Roja clicked in this international break with the 7-0 belting of Malta last Thursday prior to the Romania thrashing

Following a 4-0 victory against the Faroe Islands in September, Moreno admitted the team was still connected to their former boss and dedicated the result to him.

"It upsets me to talk about it, but this team is his [Luis Enrique's] more than anyone's," Moreno said post-match.

"It is a tiny thing, but we wanted to dedicate it, especially here in El Molinon."

Enrique was appointed Spain boss in July 2018 following a tumultuous World Cup in Russia that saw Julen Lopetegui sacked in the lead-up the tournament with Fernando Hierro taking over in the interim.

Enrique decided not to renew his contract when it expired in June 2017, before having a 13-month sabbatical prior to be appointed Spain boss.