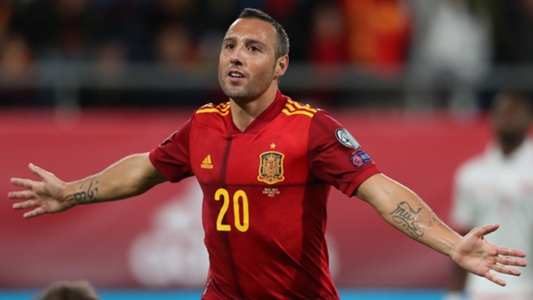 Villarreal playmaker Cazorla has worked his way back into the Spain reckoning following his arduous and well-documented injury woes and was on target in the 7-0 Euro 2020 qualifying thrashing of Malta in Cadiz.

It was an evening in which Spain's old guard proved their worth amid debut goals for Pau Torres and Dani Olmo, with Jesus Navas, Raul Albiol and Sergio Ramos all impressing – a fact not lost on Robert Moreno.

"What Santi's achieving, his form, after what he went through for nearly three years with his terrible injury problems, is exceptional," said the coach.

"Without guys like him and Raul and Sergio it's hard to win tournament semi-finals and finals.

"The contribution of people like Santi, Sergio and Raul – the generation who have already won tournaments – is incalculable.

"They have such quality and it's hard to win tournaments without their kind of experience. They've accumulated things that they not only contribute in performance but transmit to others."

Cazorla's strike followed Alvaro Morata's opener before the floodgates opened in the second half with Torres and Olmo's efforts sandwiching Pablo Sarabia's strike, before Gerard Moreno and Navas rounded out the win.

Robert Moreno was impressed with the way his side kept the pressure on their vastly outclassed opponents.

"The gap between 'big' international sides and so-called lesser nations is closing – it's very equal now across the board," he added.

"We worked really hard on opening things up, on finishing, because we knew we wouldn't have it easy. Playing well like this and scoring lots of goals is always very welcome.

"The easiest thing in the world would have been for my players to accept three or four-nil and drop their level. But we hit seven and could easily have scored 10 – that says very good things about their mentality.

"I note that the players are remembering what I told them the last time we were together and the time before that. We are apart for weeks or months but the momentum is growing so that they put into practice what I asked of them previously. That's good.