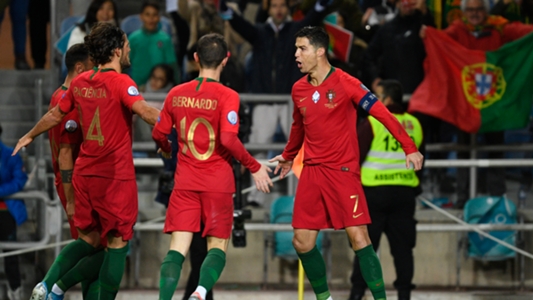 Cristiano Ronaldo's fitness was never a doubt for Portugal coach Fernando Santos as the star forward  scored a hat-trick in Thursday's 6-0 victory over Lithuania .

Ronaldo was far from a certain starter for the Euro 2020 qualifier at Estadio Algarve after being substituted in Juventus' last two matches .

Juve boss Maurizio Sarri attributed the early withdrawal against Milan last weekend to a bruised knee, but the 34-year-old played 83 minutes against Lithuania and showed no signs of fatigue.

Asked how Ronaldo was feeling when substituted late on, Santos told RTP : "He's fine. I had no doubt about that, as I said before the match. Other people did, but I didn't have any doubts."

Ronaldo opened the scoring early on from a penalty he won and curled in a second prior to half-time, before completing his hat-trick 25 minutes from the end.

Portugal midfielder Bruno Fernandes was full of praise for his team-mate, who is now up to 98 goals for the reigning European champions.

"What we have is a very motivated Cristiano, who always gives his best," Fernandes said. "He scored three times, which is normal for him."

Pizzi, Goncalo Paciencia and Bernardo Silva were also on target for Portugal, who can seal second place in Group B if they beat Luxembourg in their final qualifier on Sunday.

Santos felt his side could have scored more than twice in the first half, but was ultimately pleased with the resounding scoreline following last month's 2-1 loss to Ukraine.

"The players stuck to the plan," he said. "We played very well in the first half, with lots of variety to our game and plenty of control.

"At the break we could have had more goals. But after scoring the fourth we could afford to rest ready for the next game.

"We'll try to beat Luxembourg in the same manner, but we have less than 72 hours to recover so we'll see."