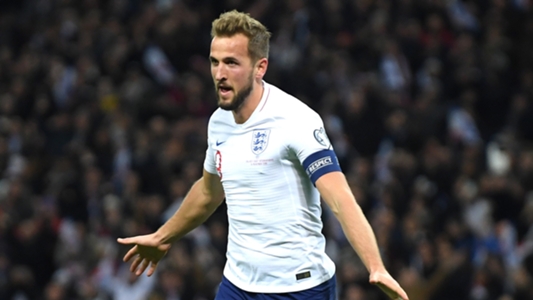 Gareth Southgate is backing Harry Kane to break the England goals record after the captain's hat-trick against Montenegro moved him to sixth on the all-time list.

Kane scored a first-half treble as the Three Lions eased to a 7-0 win at Wembley on Thursday in their 1000th match, securing qualification for Euro 2020 in style.

The Tottenham striker's goals took his international tally to 31 – moving him ahead of Alan Shearer, Tom Finney and Nat Lofthouse - with Michael Owen next in his sights on 40.

Wayne Rooney holds the England record, having netted 53 times, but Kane is just 26, and Southgate believes he is easily good enough to end up taking top spot.

"It's an amazing feat [by Kane] when you're talking about the names [Shearer, Finney and Lofthouse]," Southgate told Sky Sports . "It's lovely on a night like tonight that we can talk about those players.

"He is ruthless, he's got the ability to do it, he's got time. If everything falls into place for him, I'm sure he can do that."

But the England manager warned there is still work to do if Kane is to form part of a successful England team, with the defence again looking shaky at times despite the convincing margin of victory.

"We're blessed," Southgate said. "With the likes of Harry, Raheem [Sterling], Marcus [Rashford] and then the younger ones that are coming into the mix as well, we've got incredible firepower.

"We always think we can score goals. We will always cause opponents problems.

"We've just got to make sure we get both ends of the pitch right if we're going to be serious contenders."

Asked if England will have a stronger side at the Euros than when they reached the semi-finals at the 2018 World Cup, Southgate replied: "That's a difficult balance.

"We're fielding such a young team tonight, and we are young. We're still a work in progress. We're a hugely exciting attacking unit, but we've got a bit to learn about managing games.

"We've got to make sure we're tighter with our defending as a team, but the future is very, very exciting."