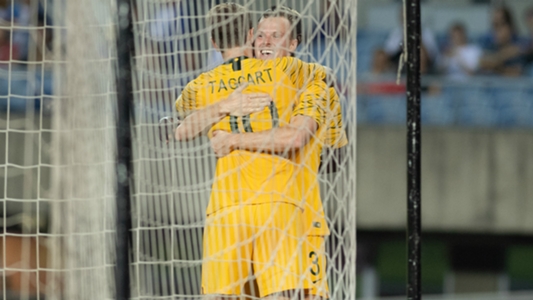 Australia made it four wins from four in the second round of World Cup qualifying as Adam Taggart secured a 1-0 win away to Jordan.

The Suwon Bluewings striker scored the only goal of the game after 13 minutes in Amman to put the Socceroos five points clear at the top of Group B.

Graham Arnold's men were given a scare in the second half, most notably when Tareq Khattab headed wide from close range, but they held firm to take a significant step towards claiming the automatic qualifying spot for round three.

Australia went ahead from their first shot of the match, with Taggart running on to Jackson Irvine's throughball and finishing past the onrushing Amer Shafi.

Irvine spurned a good chance for a second when he side-footed over the bar after Aaron Mooy's corner was flicked on at the right-hand post.

The Socceroos were fairly comfortable until the break but suddenly came under pressure early in the second half, with Mousa Suleiman shooting narrowly wide and Mat Ryan making a good block to deny Yaseen Al Bakhit from a tight angle.

Khattab then spurned a glorious chance to equalise, heading wide of the left-hand post when left completely unmarked by a static Australia defence.

Ryan produced a brilliant save to keep out Hamza Al-Dardoor's header before Al Bakhit shot straight at the keeper in injury time, as Jordan suffered their first Group B defeat and missed out on the chance to leapfrog Australia at the top.

What does it mean? Socceroos bounding clear

Victory puts Australia five points clear of Jordan at the top of Group B, with a perfect 12-point return.

They are firmly on course to secure a place in the next phase of qualifying ahead of their meeting with Kuwait in March.

This was far from the free-scoring Australia that dismantled Chinese Taipei 7-1 last month, but Taggart made no mistake with his one goalscoring opportunity, and he completed all four of his attempted passes before being taken off 20 minutes from time.

Khattab was caught out for the goal by Irvine's fine throughball and missed the best of Jordan's chances to equalise in the second half..

Australia's next scheduled outing is a home qualifier against Kuwait on March 25. Jordan are in action on November 19 at home to Chinese Taipei.