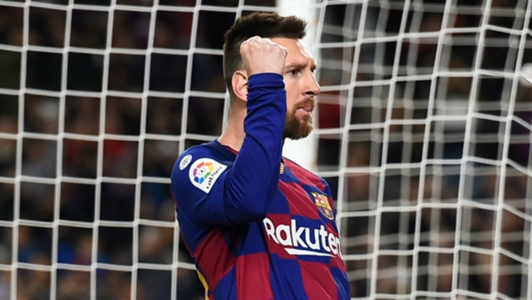 Barcelona teenager Abel Ruiz has revealed what it’s like to train with Lionel Messi as he discussed his own future at the Spanish champions.

The 19-year-old forward has his sights set on a place in the first-team, and though he has been limited to appearances with Barcelona B so far, he has trained with the senior squad.

It’s here he got to witness Messi’s skills first hand and he's adamant it will be difficult for any player to reach his levels ever again.

“He's incredible, he's impressive," Ruiz said of the Argentine. “When I go to train with them, I can enjoy being able to pass to him and being able to receive his passes.

“You can't describe that feeling. For me, he's the best player in the world and he proves it each day. He's a unique talent.

“He's someone unreachable and it's going to be very difficult to have someone like him again in the history of football.”

Though he enjoys training with Messi and would like to achieve his own dream of playing alongside him in a competitive game, Ruiz admitted there might come a time when he has to leave Barcelona in order to experience regular first-team football.

“It's not that I didn't want to stay as I've always said that my first option was [to stay at] Barcelona, but it's true that you want to keep growing and keep improving and, in the end, you're looking to do the best thing for yourself," he told EFE.

"In this case, the decision was to stay in the Segunda B [with Barcelona B] and wait for opportunities in the first team.

"I train day by day and I go step by step, I think the secret is growing little by little. The opportunities will come and you have to be ready, which is what we're trying to do in the academy.

"I want to grow as a player and as a person at this club because they've given me everything since the first day. As long as they believe in me, I'm going to believe in them.

"In the end, it's true that if you don't get the opportunities that you want, you will have to look elsewhere and find some minutes in these competitions."