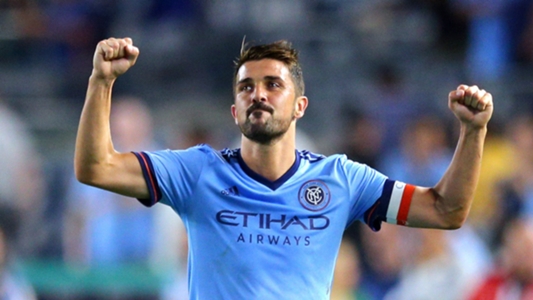 David Villa departed New York City after the 2018 MLS season as his career took him to Japan to join Vissel Kobe. Now, the Spanish star is returning to New York in a different sort of role.

The USL announced on Tuesday that Villa and co-owner Jonathan Krane, CEO of KraneShares, have been awarded a franchise in Queens, NY. The club, called Queensboro FC, will begin play in 2021, in the USL Championship, the top tier of American soccer's lower division.

Queensboro FC will host home matches in a new stadium at York College in Queens while also holding select matches at Citi Field.

The move reconnects Villa to New York City, having played at Yankee Stadium from 2014-18. The former Barcelona, Valencia and Atletico Madrid star scored a club-record 80 goals in 124 league appearances, earning MVP honors in 2016.

“I lived and played in New York for four years. I know what a special place Queens is,” Villa said. “I love the cultures, the food, the people and their passion for life and, of course, soccer. There is no other place like it in the world. It’s a dream to help build this football club in Queens and I couldn’t choose a better location.”

He added:  “Living with my family in a city with so much culture and history while playing soccer, was an amazing experience and it was exciting to be playing in a country where love of the beautiful game is growing.”

QBFC will be the 36th team to feature in the USL Championship, which played with 33 clubs split into an Eastern and Western Conference this season.

San Diego Loyal SC is set to become the 34th team in 2020, while Villa's new side will be joined by Oakland East Bay as expansion sides in 2021.

QBFC plans to operate a youth academy, with Villa closely involved having previously brought his DV7 Academy to the city during his time in New York.

"It is exciting," he said. "We’ve worked for many years on this. The opportunity to start a brand new team in a city like New York, in a borough like Queens, where the people are as passionate about soccer as I am, is huge! We're very excited about this project and can't wait to make it a reality."

He added: "I'm very happy with my career. I'm very proud.  I have loved this sport from the beginning of my life. I have tried to do my best to bring this sport everywhere.  And the future now is Queens."