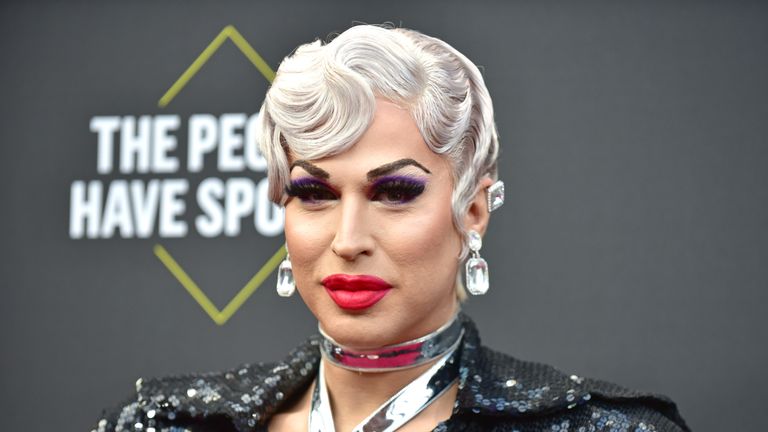 RuPaul's Drag Race is shimmying its way back to the UK for a second season - and it turns out stars of the US show are big fans of our British queens.

The hit show, a TV phenomenon in the US having run for 11 seasons, launched in the UK with a pink carpet ceremony in October, and has already been confirmed to return to our screens.

During its 10-year reign in the US, the show has become an Emmy award-winning hit, and has also sparked conversations around LGBT+ matters, discussing issues such as living with HIV, the Orlando gay nightclub mass shooting, and gay marriage.

The US series was up for best competition show and best competition contestant at the People's Choice Awards, where star Brooke Lynn Hytes spoke to Sky News on the red carpet to express his love for the British queens.

"I love it, it's so good," he said. "I love how different it is from the American one. Totally. Drag in the UK is so different, it's very campy, it's very cabaret. We don't get a lot of that in America, it's a very different style. It's very, very cool. The queens are amazing. I'm such a huge fan."

Brooke Lynn, a dancer who worked as a professional ballerina, was the first Canadian contestant to take part in RuPaul's Drag Race in the US, and came runner-up in the 11th series, which aired earlier in 2019.

She says the show has "introduced drag to the world and made us mainstream".

"We're not kind of bottom basement, dirty little secret anymore," she said. "I think my favourite thing about the show is how it's humanised drag queens. I think before, people considered drag queens like circus freaks, kind of. But with Drag Race it shows that we have stories and we have lives and you get to see what's behind the mask. I think that's so special."

After launching in 2009, RuPaul's Drag Race has risen to prominence especially in the last few years, receiving 23 Emmy nominations and nine awards since 2015. It also picked up the Critics' Choice TV award for best host last year.

The show pits drag performers against each other to test their dancing, lip-syncing, sewing and acting skills.

Brooke Lynne says the series' success shows the world is changing when it comes to diversity.

So what would her advice be to any queens thinking about applying for the second series in the UK?

"Learn how to sew," she said. "You can use that anywhere in life."

And when it comes to posing?

"It's all about the leg. Do the Angelina Jolie leg."