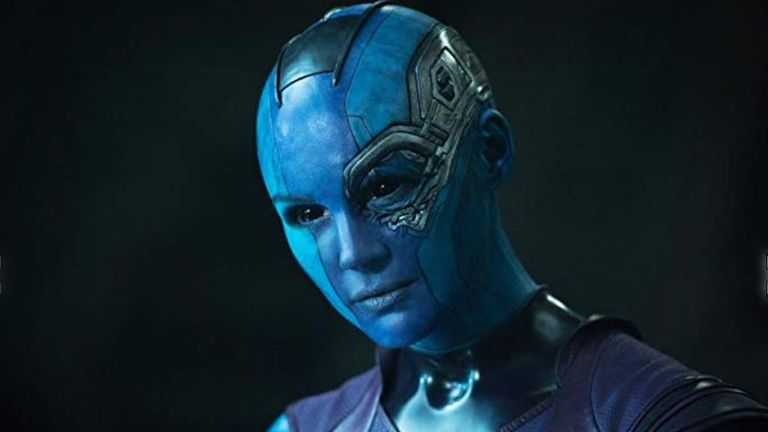 By Bethany Minelle and Gemma Peplow, art and entertainment reporters, in LA

Karen Gillan says Marvel films are "art made by real artists" and their popular appeal shouldn't cancel that out.

The Guardians Of The Galaxy star spoke to Sky News on the E! People's Choice Awards red carpet in Los Angeles, where she also presented one of the 43 gongs of the night.

The ceremony features stars of film, TV, music and pop culture, all voted for by members of the public.

Gillan says that makes the ceremony all the more relevant in her eyes: "This kind of event is exciting, because it's what the public are responding to.

"For me, I want to be in films for the fans of films. When I'm starring in a Marvel film, I want to please the fans. To see that they're enjoying it is really rewarding."

Gillan says it's all down to personal opinion: "People have always had these big blockbuster movies, and then also more prestigious films.

"But I would say art is subjective, and so it is artistic to make a big project superhero film for sure - it's just a different type of art.

"The filmmakers I've worked with on these films are real artists and they express themselves through the movies. It would seem a little unfair to strip them of the title of artist, because they are."

After the success of fellow Marvel film Black Panther at last year's Oscars, she is hopeful superhero movies could get more of a look-in at this year's Academy Awards.

"It's really nice to see what Black Panther has done, and hopefully that will have an affect on next year's awards."

However, the former Doctor Who star admits she can't reveal much about what lies in store for fans in Guardians Of The Galaxy 3, saying that "Marvel would probably send someone in a spaceship to come get me now" should she give away any details.

"I've read the script, I'm in it and people are going to love it, it's going to feel like a great instalment of the third part of the trilogy."

Unlike the first Guardians film, Gillan says she isn't having to shave her head for this instalment, joking: "I negotiate more hair with each movie."

The 31-year-old has also branched out recently, stepping behind the camera to direct her latest film The Party's Just Beginning - a film she also wrote and starred in.

The British-American indie is a far cry from the Marvel Cinematic Universe, telling the story of a girl from Inverness who's stuck in a dead-end job and coming to terms with the death of her best friend.

Guardians Of The Galaxy 3 is pencilled for release in 2022.