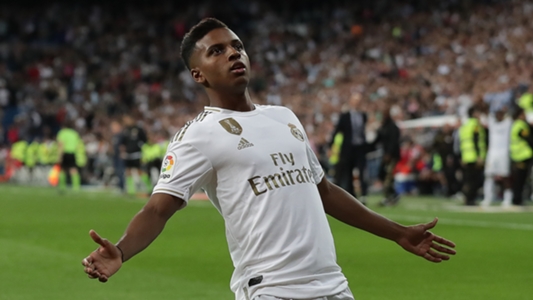 Brazilian teenager Rodrygo made Champions League history with Real Madrid on Wednesday, but one of his former coaches has revealed he could have been doing so for Liverpool instead.

The 18-year-old moved to the Santiago Bernabeu over the summer from Santos in a deal worth around €45 million (£39m/$49m).

While a tidy sum for a young player yet to be tested in Europe, the fee now looks a bargain after Rodrygo scored a hat-trick against Galatasaray, with his first-half brace inside 14 minutes the quickest in the competition's history.

Prior to Real's interest in the attacker, Premier League giants Liverpool were keen on landing the talented Brazilian, with his former Santos coach Elano admitting the Reds simply didn't offer enough money to secure his services.

"There was a period when there was very strong interest from Liverpool for him to leave when he was still at base," Elano told ESPN.

"The values ​​were very low, but they wanted to have a go. Real's offer afterwards was around €30m more! I had a conversation with the staff and said the boy was worth the bet."

Rodrygo has so far proven to be well worth the investment and has two La Liga goals to his name from just four apearances.

His hat-trick and assist on Wednesday meanwhile was the perfect way for the Brazilian to mark his first Champions League start.

Though still so young, Elano believes Rodrygo was always capable of stepping up for Real and is adamant there's a lot more to come from a player that's relatively quiet off the pitch.

"Despite his young age, he has a maturity," he said. "I strongly believe in his football. He still has room to grow.

"His personally is pretty quiet, but things are changing. He plays in the main Brazilian team and in Real Madrid. Everything in his life will increase. He will have to take some care."

Based on Rodrygo's reaction after scoring a Champions League treble, it seems safe to say he won't be getting carried away anytime soon.

“It’s a dream come true to hear the Bernabeu sing my name," Rodrygo said post-match. "I’m happy and it’s a very happy night, but I have to stay calm and be relaxed.

”Everything is going much quicker than what I expected when I arrived at Real Madrid but I’m trying to stay calm and continue working day by day."