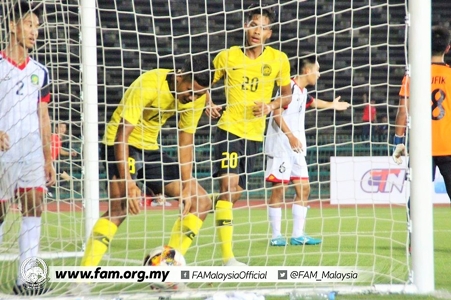 Malaysia U-19 encountered no surprises in their Group G AFC U-19 Championship qualification encounter against Brunei U-19 on Wednesday, a match they won 11-0.

Brad Maloney's charges had made things much harder for themselves in the first group match against hosts Cambodia last Sunday, letting slip a 3-0 halftime lead with two successive red cards to end the game with a slim 5-4 win.

But against Brunei they recorded a straightforward win, with rising star Luqman Hakim netting for goals and Aiman Afif bagging a hat-trick.

Their two wins have placed them in second place after three matchdays, tied on six points behind group leaders Thailand. The Thais have the much superior goal count, thanks to their matchday three drubbing of Northern Mariana Islands, also played on Wednesday. The final scoreline of the encounter was 21-0.

On Friday the Young Tigers will face Northern Mariana Islands, another match they need to win with a huge margin in order to give themselves an easier chance to qualify for the finals. Their final qualification match, on Sunday, will be against the Thais.