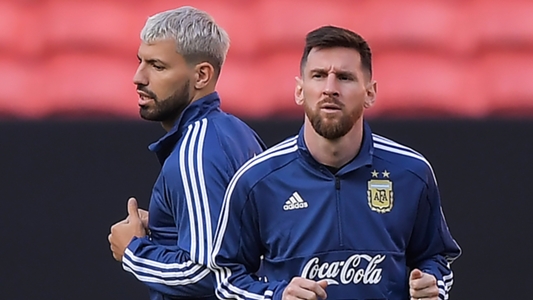 Aguero fired a hat-trick in City's 6-1 demolition of Aston Villa on Sunday, replacing Thierry Henry as the most prolific overseas player in Premier League history.

A 12th treble in the competition represents a new all-time best mark, edging City's record goalscorer ahead of Alan Shearer.

Asked afterwards whether Aguero was the best he has worked with, City manager Guardiola felt compelled to highlight his alliance with six-time Ballon d'Or winner Messi at Barcelona.

"The best is Messi," he smiled, before a follow-up enquiry pondered whether Aguero was the finest out-and-out striker he had handled in his decorated career.

"But Sergio, [among] the rest, he is certainly one of them. I said many times, he will die scoring goals. It is his talent."

It has proved a tempestuous few days at Barcelona, with club great Xavi reportedly turning down the chance to replace the under-fire Ernesto Valverde.

Guardiola expressed sympathy with the former Athletic Bilbao boss, who has won La Liga in each of his two full seasons in charge, with the Blaugrana joint-top this time around.

"Barcelona is a special place, because winning the league is not enough," he said.

"I am so sorry for Ernesto. I think he doesn't deserve that.

"Hopefully we can solve it soon, as an associate of this club."

Manchester City, who sit second in the Premier League, are set to host Crystal Palace on Saturday in their next league match.