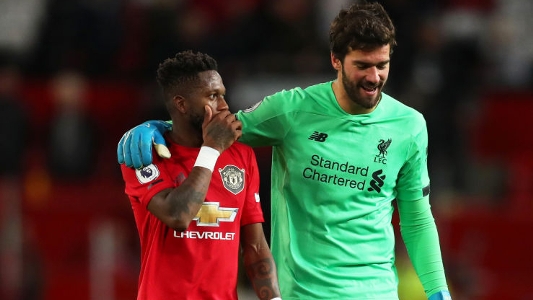 Former Manchester United captain Roy Keane has slammed the club's players for their behaviour in the build-up to their clash against Liverpool.

Prior to kick-off at Old Trafford, Red Devils duo Andreas Pereira and Fred were both seen exchanging pleasantries with Reds forward and fellow Brazilian Roberto Firmino in the tunnel.

While a seemingly innocent offering between the countrymen, Keane was less than impressed by conduct that's in stark contrast to the far fiercer approach he took during his playing days.

"I'm disgusted with the players. You're going to war, they're hugging and kissing," Keane said on Sky Sports .

"Don't even look at the opposition. You're going into battle against them. The game hasn't changed that much, the players have changed. You're going to war against these players and they're hugging each other.

Mourinho declared that the heated rivalry is special for fans and that players should be under no illusion as to how important it is.

"What the game means for the fans. In the dressing room you know that, you feel that and you breathe that," Mourinho said.

"The difference between losing at home or not to lose at home against the biggest rival makes a huge difference."

The Red Devils ultimately had to settle for a point on Sunday with Marcus Rashford's opener canceled out by Adam Lallana's late equaliser in a match shrouded by VAR controversy .

"Disappointed on behalf of the players and the fans for the effort they put in," Man Utd manager Ole Gunnar Solskjaer said post-match.

"They deserved more than the one point I felt, and it feels worse because it was towards the end of the game.

"Yes, they put us under pressure towards the end but I don’t think they created too many chances and we soaked the pressure up well. One lack of concentration and it’s a goal. That’s the level we are at."